August 09, 2012
It's been 166 days since my last 3 days trip (not to be confused with the amount of time passed since my last getaway). What can I say, I have been busy... mostly with baking cupcakes, watching bad movies on Saturday nights, cuddling on Sunday mornings and teaching baby K how to speak... but in a heartbeat, I gave that all up (except for cuddling, that came with me) and set out on a 3 day journey through CT and RI.
Having left a day later then planned, we quickly crossed the slums of Queens and ended up in suburbs of CT. The familiar hour and a half drive brought on nothing but the constant fumbling with the radio buttons and obsession over my newly acquired Iphone. That quickly stopped as we entered the town of Greenwich, CT. Neither OK or I are fans of suburban life, white picket fences and/or soccer moms but WOW! these mansio.... errrr.. excuse me homes, are definitely worth checking out and are certainly something to be desired.
Our first stop was the Dunnellen Hall - Built atop a hill in 1918 overlooking 26 acres of the most expensive real estate in Connecticut — and arguably, the United States — this 28-room Jacobean mansion has over 21,000 square feet of living space as well as a marble reflecting pool, a 52-foot indoor pool/winter garden and “sweeping views of Long Island Sound.” Oh, and it seemingly has brought bad — if not downright disastrous — fortune to almost everyone who has owned it.
I must say, the property is enormous but as you will learn later on, the mansion itself is really not very impressive. We've seen better. The 5 minute stare through the massive gates, was more then enough for us to realize that maybe instead of buying Iphones and taking trips, we should just save $ and buy our own mansions. So off we go. 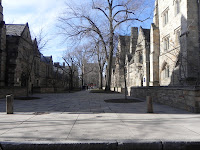 The drive through this insanity left us rather sad and hungry. It's been almost 2 hours since we had Bagel Boy so we followed my itinerary  and our grawling tummies to the the next stop, Louis' Lunch - the Birthplace of the Hamburger. I wish, I can let our stomachs do the talking here because... the castle looking hamburger joint is closed on a Sunday! Since it is located in New Haven, we found ourselves smack in the middle of Yale University!! Naturally, we spent the next half an hour gawking at smart kids with very little sense of fashion. Check out the secret society building (Skull and Bones is an undergraduate senior or secret society at Yale University, New Haven, Connecticut. It is a traditional peer society to Scroll and Key and Wolf's Head, as the three senior class 'landed societies' at Yale) and the library. Enuff time spent on this!!!
As we yelled and cursed at our stomachs, we got into the car and googled dives, drive-ins and diners and found a place minutes away. Excitement took over as we rode into the sun just to scroll down the page on my phone and learned that by the time we'd get there it will be closed. The next half an hour or so is a bit fuzzy as I was busy keeping my drool from forming an embarrassing puddle on my jacket collar. Next thing I know we were standing in front of Ted's Restaurant in Meriden, CT. Long story short, we walked in, we walked out, we googled Friendly's.
After an amazing lunch consisting of burgers, we arrived at Shadowland oddities. I would love to tell you more about this store that sells an array of quirky items, except... I CAN'T ! Ding, ding, ding.... you've guessed it - it was closed ! Speaking of disapointments, I should just right away mention  that we did not see Underhill Sanitarium in Meriden, because we dare not drive into the long, what seemed like never ending alley covered by bare naked branches of once blooming trees 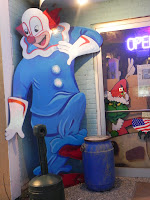 and just writing about the Seaside Sanatorium - (Originally built as a facility to treat children with tuberculosis, Seaside Sanatorium has had a long history serving as a medical facility. Overlooking Long Island Sound, it has also been a home for the elderly, a medical hospital and a facility to treat the mentally handicapped) is giving me the creeps, and maybe if it was early in the morning on a bright and sunny day, we would've ventured into Waterford, CT but instead we stumbled upon the world's biggest jack in the box. I won't tell you to much here because you simply must see this for yourself and while you are there check out Wild Bills. If you are into Freddy Kruger and clowns from "It", this IS the place for you... Don't say I didn't warn you.

This concludes our first day... I feel I should also mention that due to unforeseen circumstances, we did not go out into the town to experience all it has to offer...or doesn't have... and instead went to sleep after eating Lucky Charms cereal and chex mix... Stay tuned for more food and less creepier 2nd day !

August 27, 2019
Hey! Long time no... read?! If you are anything like me and have either traveled to other countries or went on an organized trip, or lived somewhere else or just know people in other places, every now and then (for those of you who have not heard yet Now and Then is now available on Netflix which if you have once been a tween girl, is literally the top 3 best news you can ever receive) you might have some out of town visitors, I know I have!! Ever since I was in my teens someone whether it be a relative, a friend, friends with their new spouse or an ex-bf of mine at some point all have spent a weekend (or longer) in NYC while I frantically looked for cool things to do. I usually stick to a the same itinerary every single time but eventually it gets old and I have to update the weekend plans. So to make your life easier here goes 4 days in NY exploring parts of Brooklyn, Williamsburg and Manhattan. My friend was in NY for the first time (I know! It's NY! I could not believe the
Post a Comment
Read more

June 25, 2019
Hi there! Me again. No I am not about to write about another travel adventure but I am here to tell you about a different kind of adventure. I don’t believe that adventure only awaits when you leave the Town, City or State, I strongly believe you can adventure everywhere. Therefore I’ve decided that now and again I’ll let you know about things I do in and around NYC. This blog is not only about far away destinations but also about every day experiences easily available to each and every one.  Just a random photo I took of a random wine on a random rooftop In January of 2019 I have decided that I am going to be a healthy adult and took part in dry January. For those of you unfamiliar with concept - don't try this at home. HA! Basically it's a sad & cold winter month when one gives up alcohol. As any healthy adult who just gave up drinking for at least 30 days would do, I immediately found and bought tickets to a wine fest. The good news is it was months away so plent
Post a Comment
Read more

July 30, 2019
Happy almost August! So this is a very exciting blog entry for me and I hope for you too! For one, it was a trip I took back in March with LB who has now been gone almost 60 days & I miss her dearly but in the last 3 hours over 137 texts we have made plans for another 4-5 trips next year so not everything is awful (Hang around to find out if any of them will actually take place). Second, this was the beginning of my "blogging/instagram/I like to travel/take photos and write" so I am very excited to share the details of this trip with you. I had also previously written this as an itinerary so I think to mix things up, I will leave it as such and just insert my commentary every now and then... Here it goes: Arrive in CHS ( I love Jetblue, what's your airline of choice? We arrived at 8:43 am because who does not love 7 am flights?) Upon arrival we headed to Holiday Inn Charleston-Riverview. We were there during renovation but honestly it did not bother us much,
Post a Comment
Read more