"What I like about photographs is that they capture a moment that’s gone forever, impossible to reproduce.” -  Karl Lagerfeld

Happy Tuesday! If you live on the East Coast you know that this weekend was finally gorgeous 🌻. I hope you took that chance to explore the outdoors a little and if you did not, I totally support day indoors on the couch watching Mad Men. Have you seen? I highly recommend. However we are not here to talk about that.
We are here to talk about something I realized this morning, more accurate something I always knew and it just became clearer. Photographs pick up the slack where our memory fails. It would be impossible to remember moments from 17 years ago but when looking back at my albums they refreshed my memory making me remember where I've been and what I've done. Without that it would be lost never to be remembered again.  If you read my last entry (if you did not, you most certainly should) you know that we are in the year 2002. 2002 seems to have a lot of firsts. My first romantic trip was with at the time bf PS (remember him from Miami) to Rhode Island where I vividly remember spending $500 on a B & B as a present to him. There is nothing worse than teenager with a credit card. I am pretty sure there was an argument or 2 about why I am spending so much money on a place where we'll just sleep but as any teenager, I was certain I knew what  I was doing. As I click on the photos of plush four poster bed and a clawfoot tub I wonder was it worth it? I, for once, strongly believe that every experience we have somehow shapes us into who we are today even if that means living lush at 17.
I am pretty useless when it comes to recommendations based on this trip (as you see from my earlier entry in 2011-2012, I have gone back to RI and spent significantly less on lodging) but I could tell you there was a zoo and a pretty cool one.

The rest of 2002 was uneventful. There was a trip to Poconos for 4th of July but not much was explored. As any good group of young adults, I don't think we did anything more than day drinking and late night card playing but I did manage to snap an early morning or (was it late afternoon) photo of the lake by our house which just proves that in any amount of chaos you can create your own peace. 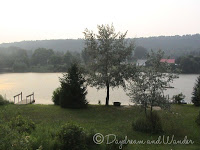 When digging through some other albums it also appeared I spent New Year '02 in Binghampton, NY where a friend of ours was attending Binghampton U. The only photos I have are of us horsing around and me on a horse (you had to have found that funny, right?) but we are not ready for those to make it into the public eye.

Well, that's it for now. Hope you come back soon to check out how I gracefully move from nostalgic memories to more present day travels & adventures.

See ya soon,
Daydream and Wander

August 27, 2019
Hey! Long time no... read?! If you are anything like me and have either traveled to other countries or went on an organized trip, or lived somewhere else or just know people in other places, every now and then (for those of you who have not heard yet Now and Then is now available on Netflix which if you have once been a tween girl, is literally the top 3 best news you can ever receive) you might have some out of town visitors, I know I have!! Ever since I was in my teens someone whether it be a relative, a friend, friends with their new spouse or an ex-bf of mine at some point all have spent a weekend (or longer) in NYC while I frantically looked for cool things to do. I usually stick to a the same itinerary every single time but eventually it gets old and I have to update the weekend plans. So to make your life easier here goes 4 days in NY exploring parts of Brooklyn, Williamsburg and Manhattan. My friend was in NY for the first time (I know! It's NY! I could not believe the
Post a Comment
Read more

June 25, 2019
Hi there! Me again. No I am not about to write about another travel adventure but I am here to tell you about a different kind of adventure. I don’t believe that adventure only awaits when you leave the Town, City or State, I strongly believe you can adventure everywhere. Therefore I’ve decided that now and again I’ll let you know about things I do in and around NYC. This blog is not only about far away destinations but also about every day experiences easily available to each and every one.  Just a random photo I took of a random wine on a random rooftop In January of 2019 I have decided that I am going to be a healthy adult and took part in dry January. For those of you unfamiliar with concept - don't try this at home. HA! Basically it's a sad & cold winter month when one gives up alcohol. As any healthy adult who just gave up drinking for at least 30 days would do, I immediately found and bought tickets to a wine fest. The good news is it was months away so plent
Post a Comment
Read more

July 30, 2019
Happy almost August! So this is a very exciting blog entry for me and I hope for you too! For one, it was a trip I took back in March with LB who has now been gone almost 60 days & I miss her dearly but in the last 3 hours over 137 texts we have made plans for another 4-5 trips next year so not everything is awful (Hang around to find out if any of them will actually take place). Second, this was the beginning of my "blogging/instagram/I like to travel/take photos and write" so I am very excited to share the details of this trip with you. I had also previously written this as an itinerary so I think to mix things up, I will leave it as such and just insert my commentary every now and then... Here it goes: Arrive in CHS ( I love Jetblue, what's your airline of choice? We arrived at 8:43 am because who does not love 7 am flights?) Upon arrival we headed to Holiday Inn Charleston-Riverview. We were there during renovation but honestly it did not bother us much,
Post a Comment
Read more