June 25, 2019
Hi there! Me again. No I am not about to write about another travel adventure but I am here to tell you about a different kind of adventure. I don’t believe that adventure only awaits when you leave the Town, City or State, I strongly believe you can adventure everywhere. Therefore I’ve decided that now and again I’ll let you know about things I do in and around NYC. This blog is not only about far away destinations but also about every day experiences easily available to each and every one.
In January of 2019 I have decided that I am going to be a healthy adult and took part in dry January. For those of you unfamiliar with concept - don't try this at home. HA! Basically it's a sad & cold winter month when one gives up alcohol. As any healthy adult who just gave up drinking for at least 30 days would do, I immediately found and bought tickets to a wine fest. The good news is it was months away so plenty of time to give my liver a chance to regenerate itself after all the birthday and holiday drinking. My friend JM who is very into wine was more than happy to join me and after paying 29$ for a ticket each on Goldstar we began counting days... just kidding we put it on our respective calendars and totally forgot about it. Since then we decided that we have to step up our wine game and test out 2 more wine fests and so here I am now telling about them so you don’t have to go to all (unless you want to of course).
Ok so Wine Fest #1
NYC Winter Wine Fest - It takes place on March 9 at PlayStation Theater which transformed into an indoor vineyard!(their words not mine). I remember that day as of it were yesterday and as we embraced New York’s winter air and ventured out into Times Square on Saturday afternoon we both remembered why we typically avoid Times Square on Saturday afternoons. If you don’t like crowds perhaps this experience is not for you. We had 8 pm tickets and had to stand in somewhat of an annoying line to get inside. Inside just as outside was bustling with Long Island, stay at home moms who finally had a night to themselves. Don’t get me wrong, you do you girl but for those of us who have the luxury of having an adult beverage anywhere, anytime, their enthusiasm was just a little unnecessary.
The PlayStation theater was huge and we drank tons. At some point there was a live band, details are fuzzy. Also we made a mistake of eating Panera before which is also the day I, for the first time tried a bread bowl which btw is delicious!!!
FYI if you go next year, there is food. See this is why I am here, to give you helpful pointers. We are talking cheese, pasta, salad, crackers and bread. By the time we wanted more food it was already the kind of food that has been sitting and breathed on for hours so a hard NO. Lesson learned - don’t eat before!!!

Overall if you have a lot of time and don't mind large crowds with a lot, a lot, a lot of wine to try I do recommend. We made some friends and kept coming back to the same counter, took some boomerangs at a photo booth and tried blue wine. For more info Wine Wine Wine.
Because one wine fest is not enough, a week later JM and I bought another round of tickets to NYC Wine Fest for April 9th, also on Goldstar but this time for 14$.
Wine Fest #2
We had 6 pm tickets and this time did not eat. We met at The Tunnel (for those of you my age and spend your earlier years in NYC clubs, yes Tunnel!!! for those of you who have no idea what I am talking about, carry on) and as we walked in were slightly disappointed by the crowd and lack of wine tables. We drank some wine, snapped some selfies, I ate an overpriced lobster roll and we got yelled at by a man giving out champagne gummy bears. Quickly after we bounced to continue drinking at an East Village bar. Piece of advice to you all, skip this one as I do not recommend. If you don't want to listen to me but want to try for yourself Click here 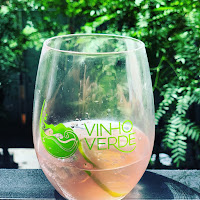 If you think 2 wine fests later we were done, you don't know us at all. Recently I stumbled upon another $29 deal this time on Puls'd and immediately sent it to JM cuz #winebesties. We had some other girls join us and after we met on a sunny, hot Saturday at Second Floor on June 15 at 1 pm, I had quickly realized this event is #BasicAF (I say as I use "hashtag basic"). Out of the 3, probably my favorite although I have had the least amount to drink.
Wine Fest #3
The wine was all Portuguese and the event was very Instagram worthy. From trendy dressed (for the most part) couples and group of friends, to a very sophisticated glass, to some very nice food tastings (dumplings and mochi ice cream just to name few), and a nice outdoor space where you can boomerang as many times as you need to get that perfect story, I definitely pick this one over the rest. To plan for next year Go here.

Few tips: Buy discount tickets in advance, they do sell out, bring a large enough purse to carry the glass home when you are done (if you are into that sort of a thing), don't drink on an empty stomach & have fun fun fun!!!

August 27, 2019
Hey! Long time no... read?! If you are anything like me and have either traveled to other countries or went on an organized trip, or lived somewhere else or just know people in other places, every now and then (for those of you who have not heard yet Now and Then is now available on Netflix which if you have once been a tween girl, is literally the top 3 best news you can ever receive) you might have some out of town visitors, I know I have!! Ever since I was in my teens someone whether it be a relative, a friend, friends with their new spouse or an ex-bf of mine at some point all have spent a weekend (or longer) in NYC while I frantically looked for cool things to do. I usually stick to a the same itinerary every single time but eventually it gets old and I have to update the weekend plans. So to make your life easier here goes 4 days in NY exploring parts of Brooklyn, Williamsburg and Manhattan. My friend was in NY for the first time (I know! It's NY! I could not believe the
2 comments
Read more

May 17, 2019
It's me here again... I'm making up for the lost time so you might hear from me quiet a lot. I've been thinking how do I even start this, it seems when I started in 2011 (saying that never gets old) I just jumped into it but my interest in travels goes way way back. My family and I moved to US in 1996 and although I would love to tell you about that adventure, I don't recall much except that it was chaotic and long drawn and yet all over in few hours at least for me but I was only a kid, what did I know. I could tell you we flew Air France and stopped at Paris and I thought I was super "cool". I remember playing cards, eating on the plane and absolutely falling in love with flying. At least that's what I tell myself now, I might have had a different reaction 23 years ago. Back to this current adventure though, I spent all day thinking I should start from my more recent getaways but that seems strange because that just distances us from the older ones so
1 comment
Read more