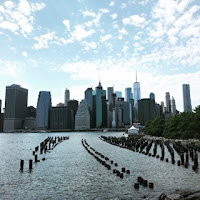 If you are anything like me and have either traveled to other countries or went on an organized trip, or lived somewhere else or just know people in other places, every now and then (for those of you who have not heard yet Now and Then is now available on Netflix which if you have once been a tween girl, is literally the top 3 best news you can ever receive) you might have some out of town visitors, I know I have!! Ever since I was in my teens someone whether it be a relative, a friend, friends with their new spouse or an ex-bf of mine at some point all have spent a weekend (or longer) in NYC while I frantically looked for cool things to do. I usually stick to a the same itinerary every single time but eventually it gets old and I have to update the weekend plans. So to make your life easier here goes 4 days in NY exploring parts of Brooklyn, Williamsburg and Manhattan.

- Highline -  There is so much I can tell you about Highline as it is my favorite place in the city (lots of favorites in here), but it's so much more fun if you go explore on your own! Check out the Chelsea Market below - tons of food options, jewelry places and even vinyl records.
We went to Nolita and apparently missed the memo that for Rubirosa you have to get reservations so we ended up going to this pizza joint and it was great!
All in all what a lovely, exhausting weekend but if you ask me makes for a great long weekend itinerary if you are having out of towners over or if you just want to explore New York.

Have fun and enjoy the rest of the summer. Personally, I cannot wait for fall!

Dominican Republic: A vacation to die for

June 24, 2019
So if you’ve been reading the news, checking social media or chatting to literally anyone, you know that Dominican Rep has been getting a lot of attention lately and not the good kind. Let me preface this entry with my opinion - If you have plans to travel to DR in the immediate future you might want to check out a different country with maybe slightly less unexplained deaths in the last few months ( for full list of travel advisories, click  here . I warn you there are quiet a few places on the list but don’t get discouraged from traveling my friends ). I also should then mention that quiet a good number of my Dominican friends will tell you that DR is just as safe (or unsafe) as any other county so I guess book that trip! or don't! You know whatevs. Side note: This also serves as a great topic at a BBQ but as my friends and I have learned, Alexa has 0 opinion on this topic.  The BBQ referenced above Ok now as for me - all this talk about DR no matter how heart breaking, r
1 comment
Read more

June 25, 2019
Hi there! Me again. No I am not about to write about another travel adventure but I am here to tell you about a different kind of adventure. I don’t believe that adventure only awaits when you leave the Town, City or State, I strongly believe you can adventure everywhere. Therefore I’ve decided that now and again I’ll let you know about things I do in and around NYC. This blog is not only about far away destinations but also about every day experiences easily available to each and every one.  Just a random photo I took of a random wine on a random rooftop In January of 2019 I have decided that I am going to be a healthy adult and took part in dry January. For those of you unfamiliar with concept - don't try this at home. HA! Basically it's a sad & cold winter month when one gives up alcohol. As any healthy adult who just gave up drinking for at least 30 days would do, I immediately found and bought tickets to a wine fest. The good news is it was months away so plent
2 comments
Read more